Limits on emissions in the automotive sector are expected to become even more stringent in the future, with the US and EU leading the regulation pattern. Diesel accounts for about 50% of yearly car registrations in the EU (though less than 1% in the US) but, unlike with gasoline, exhaust emissions controls (mainly for NOx and PM) are more complex and require implementation of relatively new technologies and higher costs. The most likely scenario is a progressive diesel marketshare decrease, though keeping a relevant positioning (above 50%) in medium-upper passenger car segments by 2030.

The transport sector is one of the main sources contributing to emissions of air pollutants, together with the energy, industry, commercial, institutional and household sectors, as well as agriculture and waste. The transport sector has considerably reduced its emissions over the past decade, yet it is still the largest contributor to NOx emissions, accounting for 46% of total EU-28 emissions1 . Diesel-powered vehicles account for 80% of total NOx transport emissions, ranking as one of the main targets of governmental emissions reduction policies. For NOx emissions from diesel cars, limits were reduced by 68% from Euro 4 to Euro 6; however, recent analyses indicated that “real-world” performance – when driving on road under normal conditions – is much worse than a typical performance measured by “official” laboratory tests using the NEDC driving cycle. This is true for a set of pollutants, not only for NOx; nevertheless, the amount of CO2 (which is linearly correlated with fuel consumption) produced on the road can be 20–30% higher than official measurements indicate, whereas the differences are even higher for NOx emissions, and in particular for diesel vehicles. In the latter case, real-life measurements show that NOx emissions can be, on average, as much as four or five times higher than shown in laboratory measurements.

NOx emissions are then a big issue for diesel engines. And it is mainly a European OEM issue since nearly 50% of yearly new EU car registrations are diesel powered. The situation is different from other major markets. The US, Chinese and Japanese markets are all dominated by gasoline-powered cars, with diesel cars playing almost no role (except in India, where diesel market share is about 50%).

The EU is actually working not only on tightening emission reduction rules (standard Euro 6 up to Euro 6d), but also on improving testing procedures for pollutant emissions and fuel consumption of light-duty vehicles. Compared to tests under laboratory conditions, light-duty vehicles have significantly higher emissions when actually on the road, and two new testing procedures are currently being developed in order to assess the performance of vehicles under real-life conditions: Real Driving Emissions (RDE) for measuring regulated pollutants, and the Worldwide Harmonized Light-duty Vehicles Testing Procedure (WLTP) for measuring CO2 emissions

The European Commission wants to introduce the new mandatory RDE test procedure for type approval of lightduty vehicles by 2017. According to the new procedure, emissions will be measured on the road by a Portable Emission Measurement System (PEMS). This new procedure will imply significant changes for OEMs and higher costs; since exhaustcontrol systems will have to perform under a broad range of different operating conditions, the logistics of type-approval processes will have to be restructured and new measurement technology will be applied.

A complete CO2 reduction strategy should include a “diesel focus” in order to fill in the gap, and investments in R&D will be required.

The analysis of NOx emissions of diesel cars and related emission-control costs is a non-linear proportion: emissioncontrol costs necessary to be compliant with EURO 6 limits are more than three times those required for EURO 3’s limits. 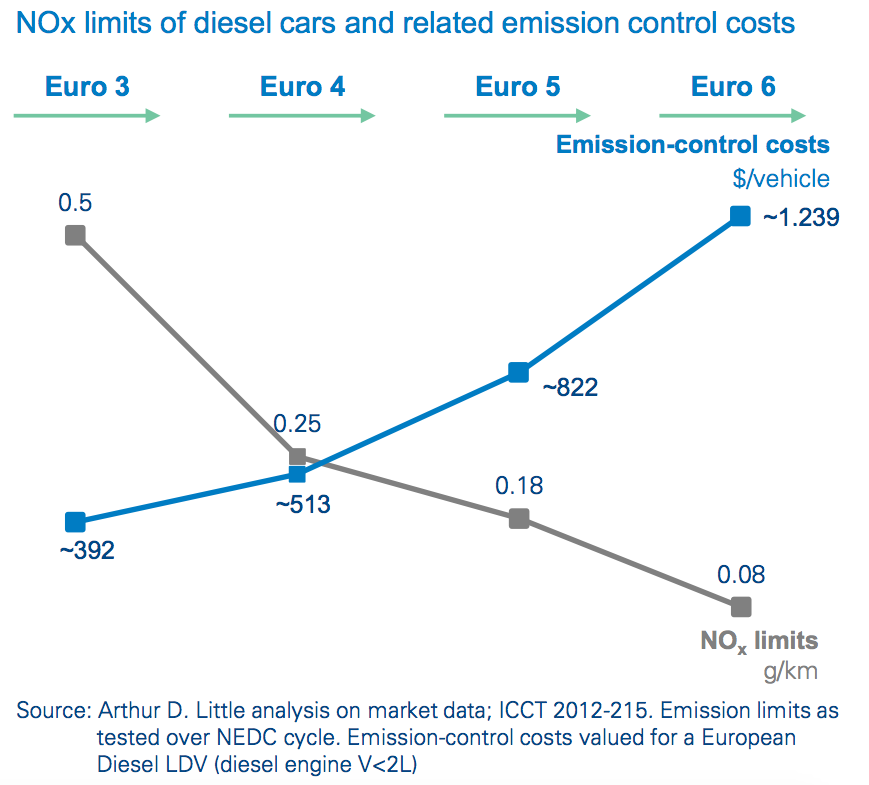